What is a Smart Contract?

How do smart contracts work?

One of the blockchain key tool is smart contract, first coined by cryptographer and legal philosopher Nick Szabo in 1994. He wrote:

“A smart contract is a set of promises, specified in digital form, including protocols within which the parties perform on these promises.”

The classic example of a smart contract offered by Szabo is a vending machine. Once a purchaser has satisfied the conditions of the “contract” (i.e., inserting money into the machine) the machine automatically honors the terms of the unwritten agreement and delivers the snack. He also pointed out that:

“The basic idea of smart contracts is that many kinds of contractual clauses (such as liens, bonding, delineation of property rights, etc.) can be embedded in the hardware and software we deal with, in such a way as to make breach of contract expensive (if desired, sometimes prohibitively so) for the breacher.”

The smart contract idea fits perfectly with the properties of blockchain technology, where contract clauses written in cryptographic building blocks are stored and automatically executed in a distributed ledger when predefined conditions are met, without the intervention of a trusted third party. 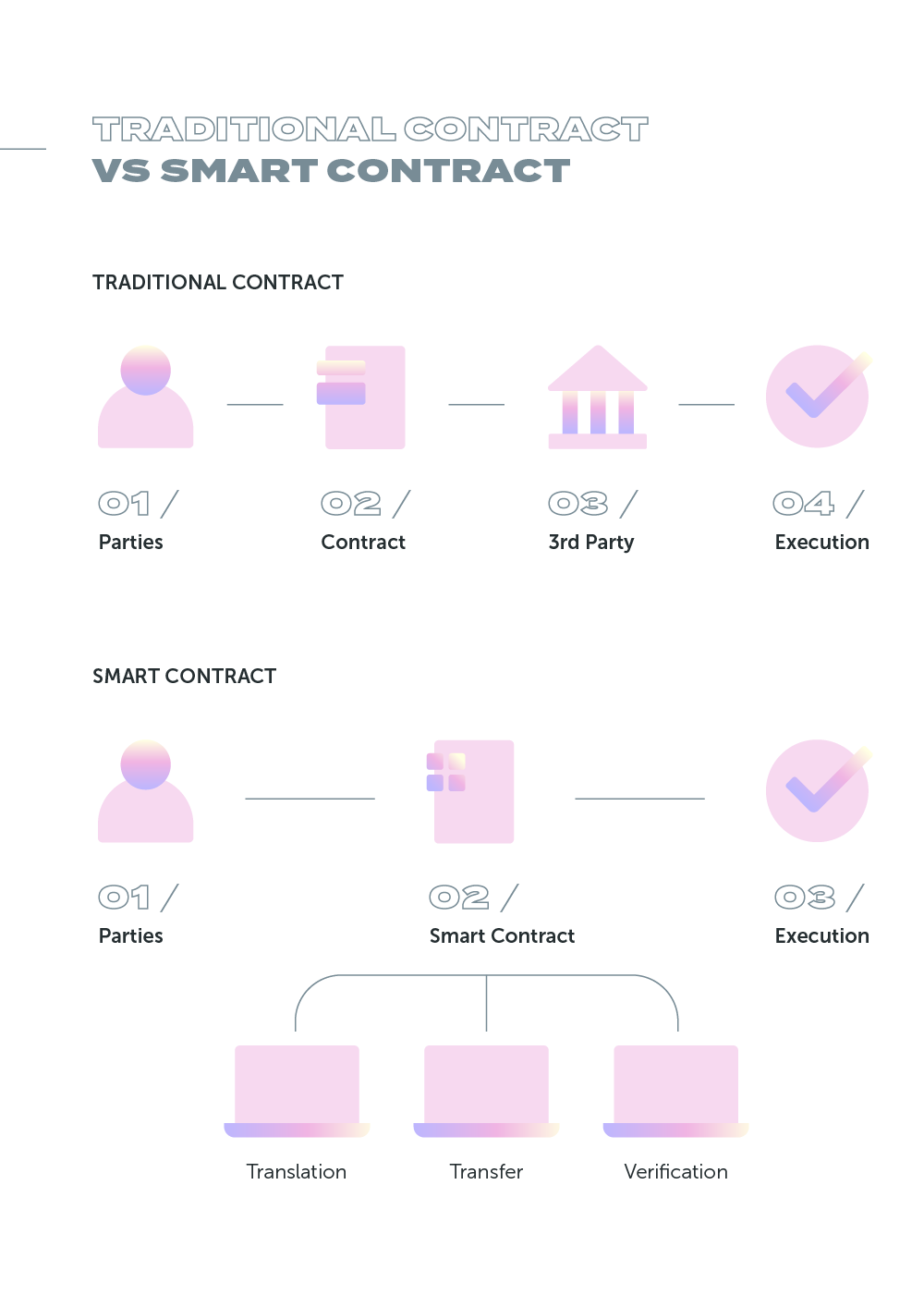 What is a Smart Contract?

Using the word of Szabo:

“A smart contract is a computerized transaction protocol that executes the terms of a contract. The general objectives of smart-contract design are to satisfy common contractual conditions (such as payment terms, liens, confidentiality, and even enforcement), minimise exceptions both malicious and accidental, and minimise the need for trusted intermediaries. Related economic goals include lowering fraud loss, arbitration and enforcement costs, and other transaction costs.”

In few words, smart contracts are lines of computer code built upon blockchain technology, digitally mimic all the characteristics of a traditional contract.

Many smart contracts will originate as documents written in natural language that require subsequent translation into executable code. The approved contractual clauses are converted into computer code, recorded as an immutable transaction stored in the blockchain and executed automatically upon the occurrence of certain conditions established prior to the signing of the contract by the parties to the agreement. Therefore, the evaluation of the requirements, the respect of the positions and the status of the contract are not regulated by third parties since this role is covered by the network consensus.

Once a smart contract is deployed on a blockchain, it self self-execute and cannot be modified or aemended due to the immutability of block-chains: any emendation requires the creation of a new contract.

How do smart contracts work?

To clarify the functioning of smart contracts, it is necessary to distinguish all the phases that characterize their birth: 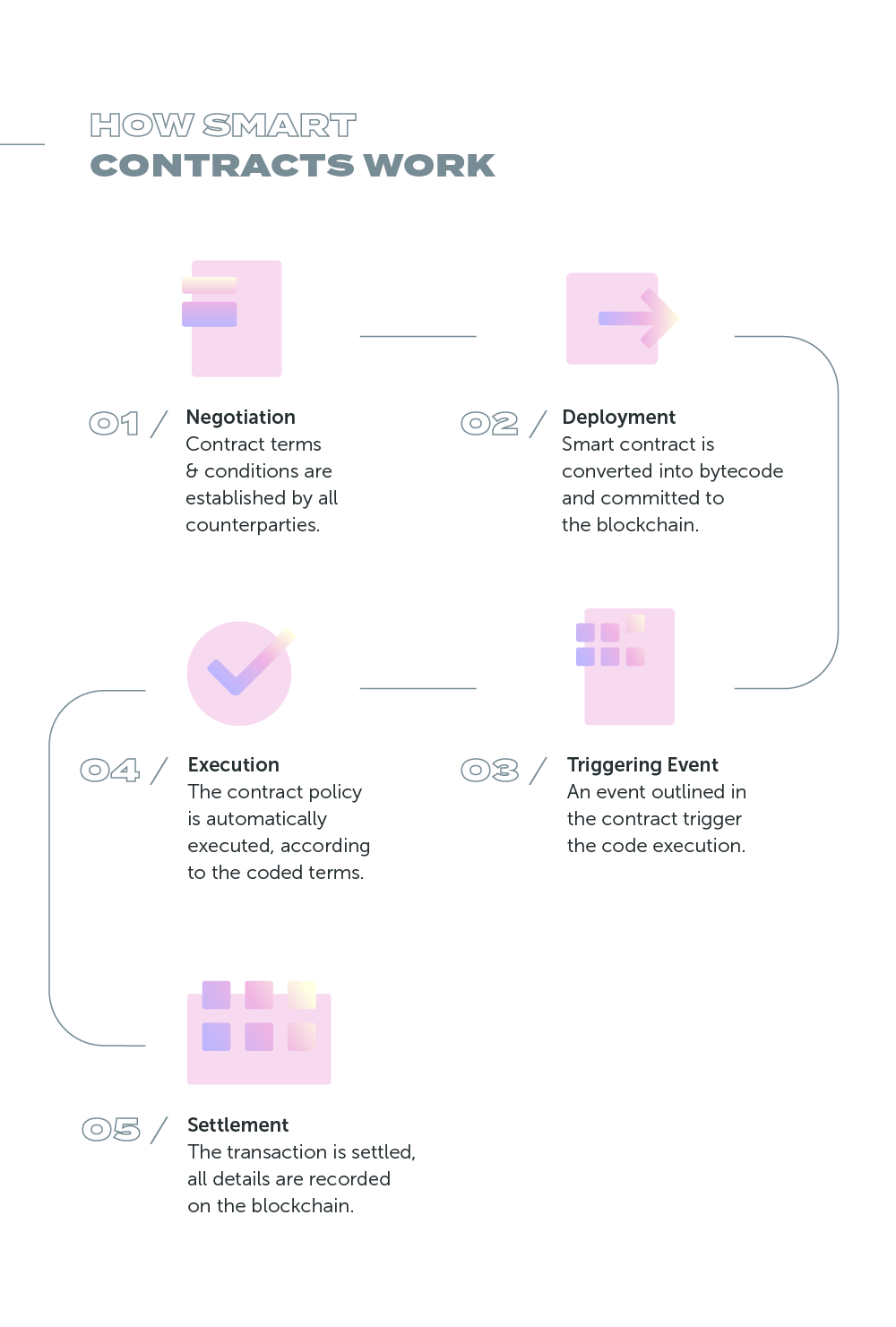 Not all blockchains support distinctive features for writing and developing smart contracts (including high-level programming languages, contract code execution, and security levels). Over the years, several platforms that aim to solve different problems through the use of smart contracts have developed:

Smart contracts are boosting a broad spectrum of applications developed in several implementation domains such as:

How to Analyze Cryptocurrency Before Investing

Key Components Of The Cryptocurrency Ecosystem